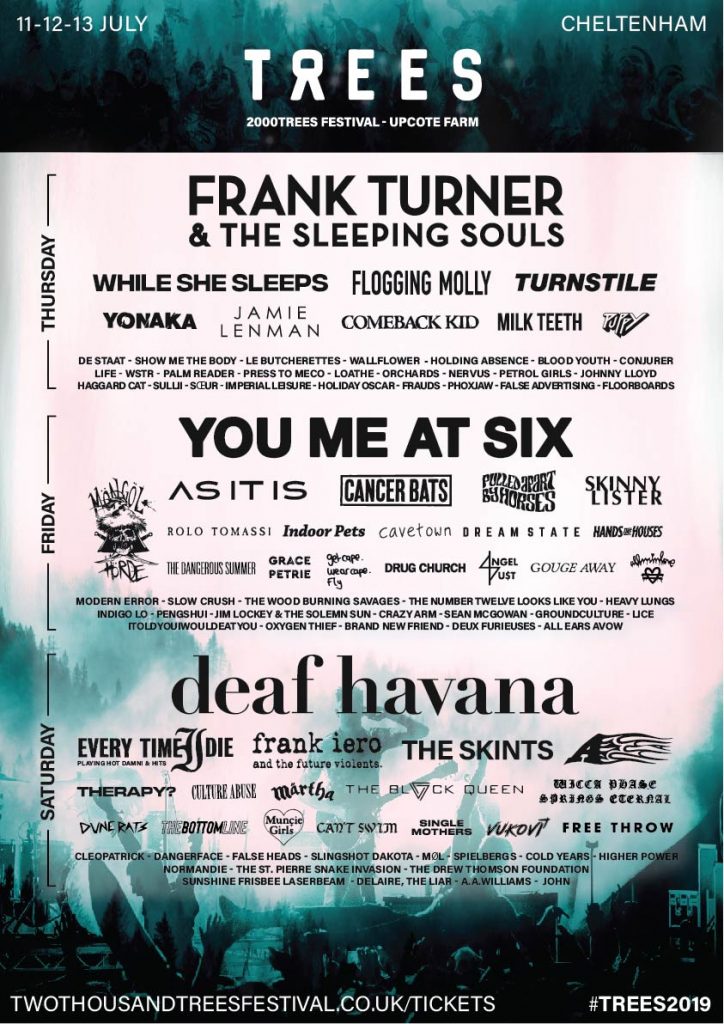 Beans on Toast once sang, “Post Festival, Festival Blues” to summerise his post-festival come down, and I know the feeling well enough, but 2000 Trees 2019 has filled me with so much optimism it’s unbelievable.

Kudos for improving the family vibe and kids offerings. Rebellion Extinction, recycling points for cans, spoken word stage and no-camping in the arena were all fantastic improvements to this year’s experience.

It really is just a festival of love and friends (and lost evenings…) an absolutely unmatched vibe that you just know you’re going next year regardless of the lineup. The people, friends new and old who make the festival, the line up just becomes our opportunity to have some fun. And what fun we had.

After missing the Thursday because of child birthdays, I arrived at the site wayy too late to even catch Nigel’s Sad Song Co. busk set. Despite him calling me Simon when I saw him (totally forgiven) it apparently went really well which is the least comforting report you want. Though I’m glad it went well for him.

Rest of Thursday night was a haze, as I “drank to catch up” before making my back to my car, and this is the best tip I can offer – Sleep in your car! Futon mattress in the back of an estate with the seats down is bliss. More silent in a field in the middle of nowhere than being at home! And no drunks stumbling into your tent guide ropes. Win win win win win.

Mike Barham finally got the reception he deserved from his busk spot on the Under The Bridge stage on Friday night. The 12 people directly in front of him spent the whole festival thereafter walking past our campsite telling him how fantastic he was. And to be fair he really, really was. The start of more things to come? Let’s hope so.

Tom Mallard and I played a game of best heckles during his set, and it’s fair to say chanting “One! More! Song!” after they’ve played their first is my favorite.

Trees was introduced to 11-can Kieran. Yes, I managed to actually drink that many cans of Thatchers and not be sick, despite the very generous donation by Georgie for the ride on the Waltzers. Dan couldn’t hack it and was well on the way to pulling a whitey by this point. I’m a fucking delight when I’m drunk. 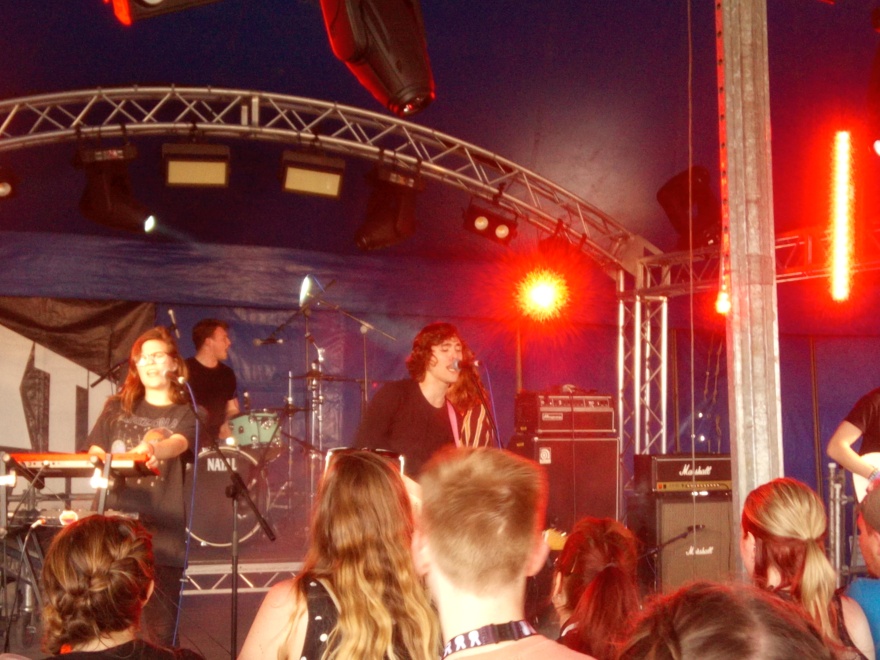 Friday’s highlight came early for me. Brand New Friend belted out their 30 minute set without too much banter letting the chorus’ doing the talking. I literally flipped my lid. Since they played for us in Swindon supporting Sean McGowan, I’ve been listening to their album non-stop. It’s utterly perfect from start to finish, and their set too was just perfect. Ben Sydes had already started the day in the nicest possible way, making a long overdue to the official line up in the Forest session. This was after a quick interview with us on the BBC Introducing session on the new Word Stage. Thanks Rich! Always love a good opportunity to regale an audience with the story of how I delivered my child in the back of a car!

I caught Pengshui on the way to Brand New Friend, and they were awesome. Grime-punk? (Basement Jaxx-y) Nothing else quite like it currently on the circuit and in that blistering form of their early days. Superb.

Barry got to be Rocksoxgen Thief again, which is always a pleasure and the first time I think I’ve seen the full band show since last years album (?) and he too was also in superb form. Then came itoldyouiwouldeatyou (our 15 year anniversary headliners!) arguably the band I was most excited about playing. Their busk set the night before was superb, and they managed to play a bunch of songs then, that didn’t make the electric set, so was well worth catching both. Alexi was in fine form and seems to do well with the restraint of not being the focus in the band. 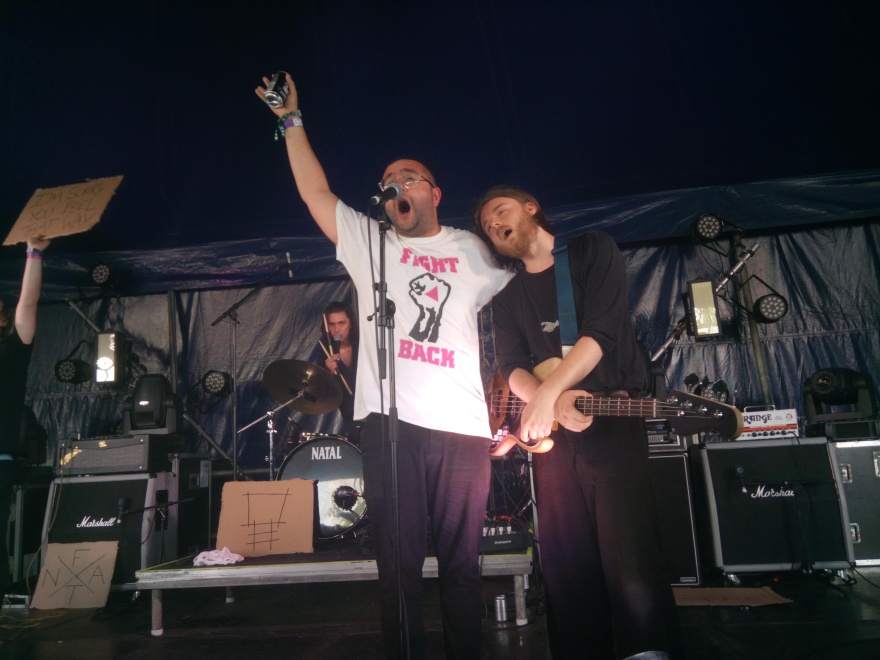 You’ll notice a FTNA sign there… Not entirely sure what that’s all about, but it seems to keep people entertained on Twitter. They were superb though, and thoroughly deserving of the big shout outs I was giving their drummer Sean during our BBC interview. (Hope to have the audio in the coming weeks to share myself.)

Having caught the end of Sean McGowan‘s set, and dinner, we went for a little stomp like you do a Trees preparing for the inevitable Jim Lockey & The Solemn Sun love in, featuring Andy Oliveri on bass duties. They played wall to wall bangers, and despite some awkward squealing were superb. Side shows performers from All Ears Avow Jake Wilcox’ on guitar tech duties, a happy Frank Turner and original bassist Phil, who missed this show. The set probably confirming that Jim’s music is now folklore and timeless. 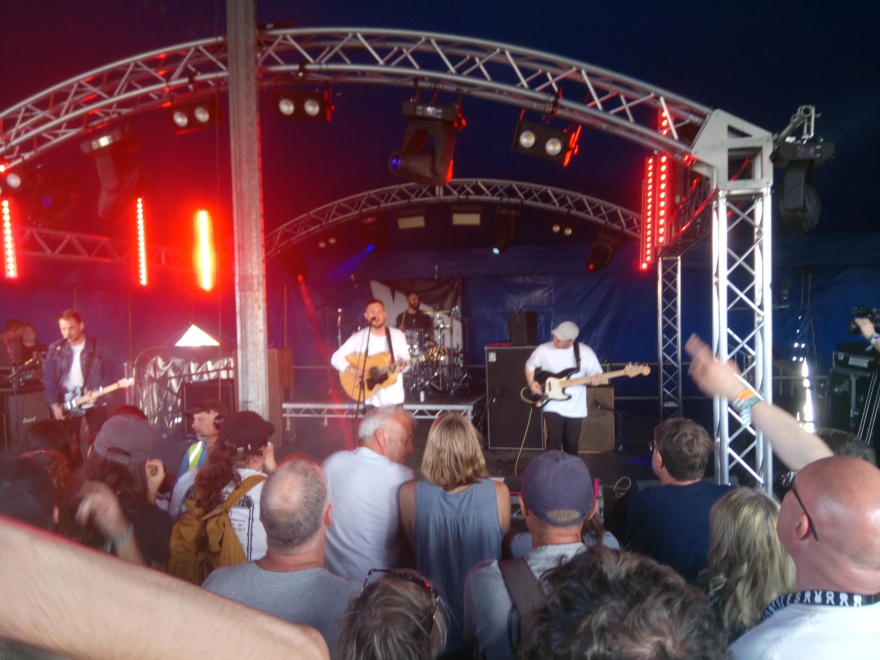 Allusinlove were good if not particularly memorable for me, as I probably had one ear on getting in the zone for The Wildhearts. A band I haven’t seen for ages, yet had the pleasure of hosting Ginger last year in Swindon. A faultless set with a guest Frank appearance (he gets about) and a rousing finale of I Wana Go Where The People Go, which on reflection there was a few legacy acts / songs I wanted to hear, this was one of them. Kinda wanted Anthem too, but won’t complain, I’m sure they’ll play it in Bath in a few months. 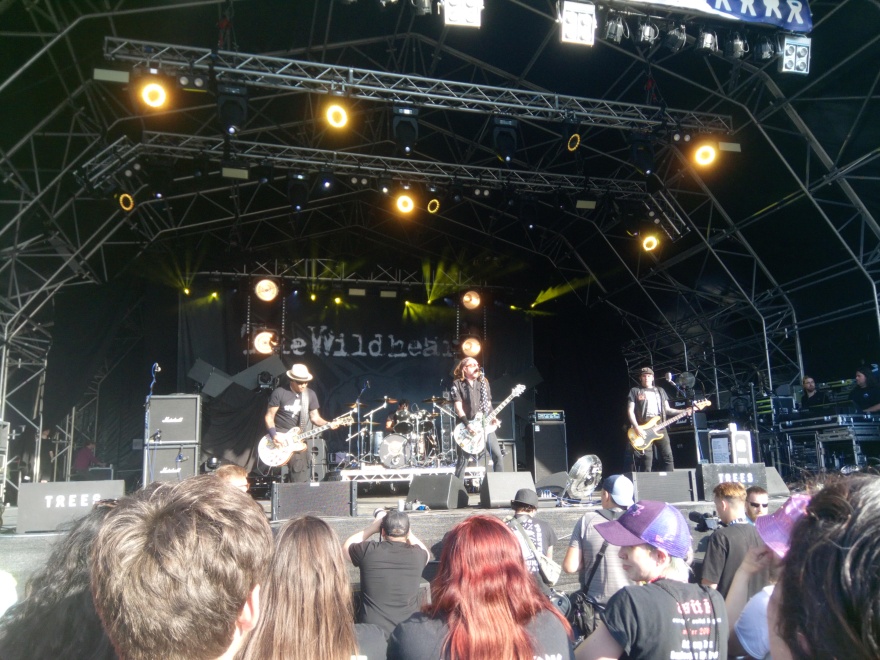 As It Is were on next on the main stage, which I will quite happily never sit through ever again. Only wanting to eat food kept me there. Indoor Pets were delightful though, and the first time I had seen them since the name change and playing support for us to Ash a few years ago. They still have all the indie-boy charm and tunes. 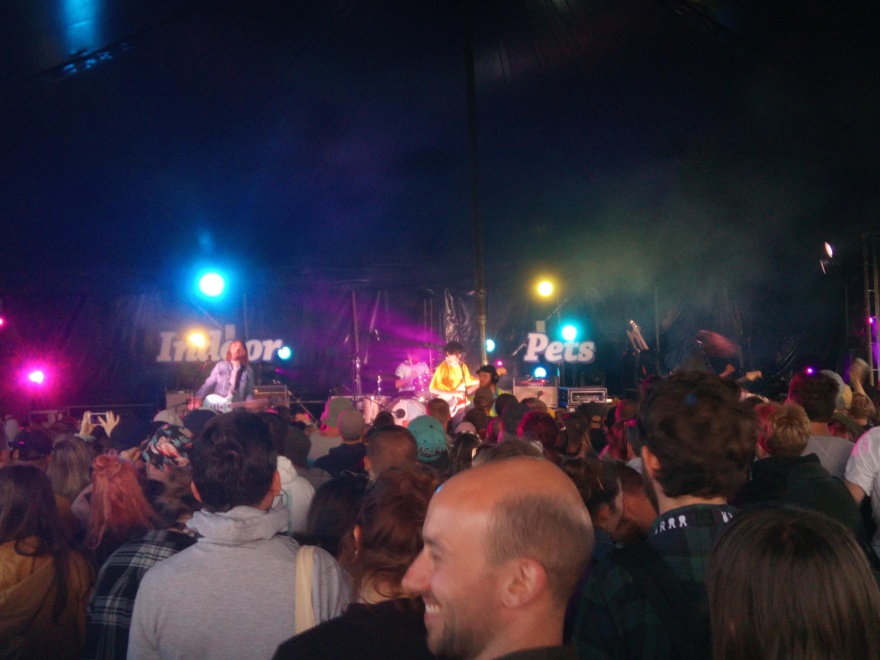 Really sorry for the terrible picture quality. It’s been a joke for years and I don’t see it ever improving.

So, the end of the day bought us to Mongol Horde and their 21st show. It’s always a pleasure to see drum giant Ben Dawson, but today he was outshone only by the glitterball that came out to sing. Another absolute banger of a set, fantastic light show ideas that I’m going to try and rip off at our Gender Roles gig in Chippenham in a few weeks and I got to scream my guts up to Million Dead cover, Smiling at Strangers on Trains. Rob and I ruined our voices in that moment, but I am delighted I managed to remember every wordy word Frank put in that song which kick-started my love for MD & latterly everything Frank. 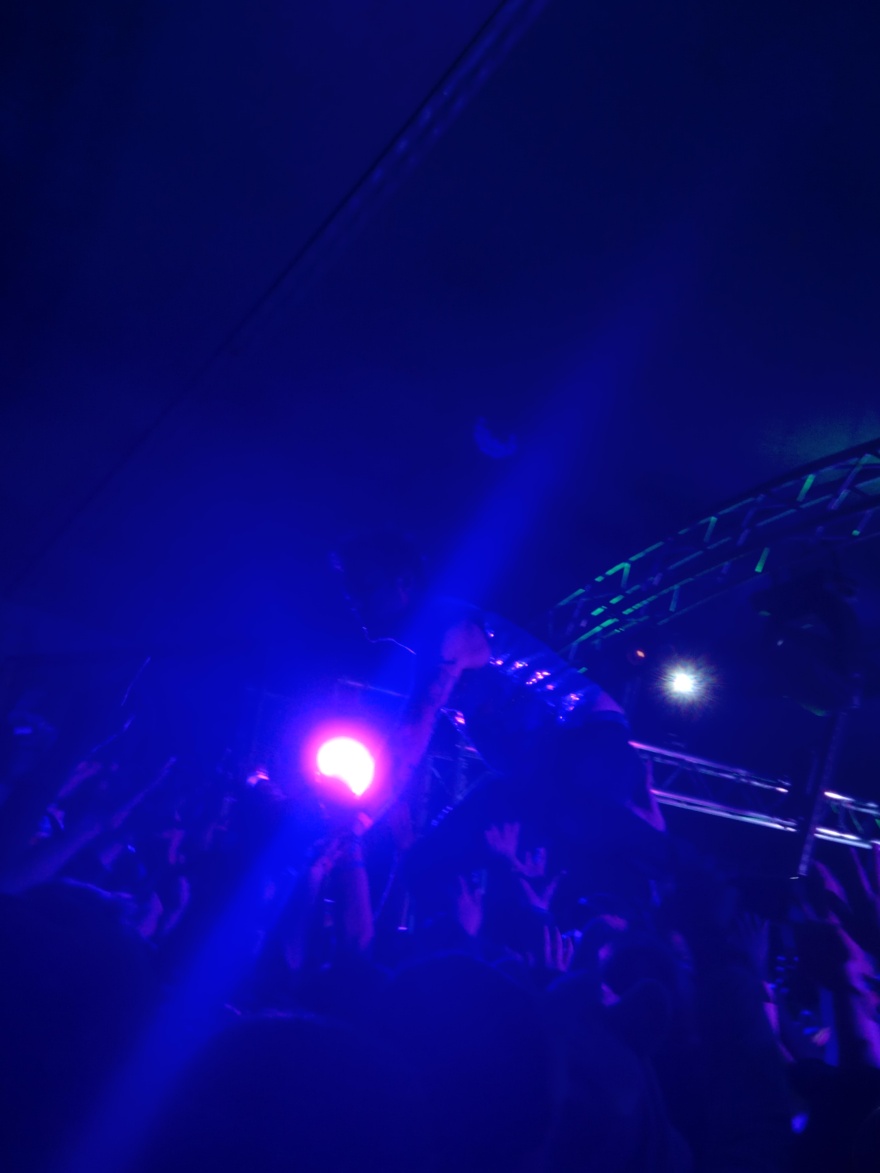 Then it was a rush back to the busk stage and getting ready to heckle Mike. Sydes had a hard task to follow, but he did (Mike slew the crowd with a City & Colour cover, Dangerzone and the best quips and comebacks to a passing crowd you will see & hear). Sean pulled a blinder and then I believe I went disco dancing at the silent disco. We met a nice medic there who gave us a nice rundown of the top 10 best injuries the festival had had so far, which was sobering. A slow walk back to my car & slice of silence finished day 2 at Trees around 2.30am. Perfect.

PHEW, what a day. I’ll give you part two tomorrow if you’re interested.